Back to the top

25 years ago I embarked on my mission to bring back the uplifting sounds of Hardcore Rave music. I then proceeded to cut my first ever 10” dubplate at JTS Studios in East London which ended up as SMD#1. For myself and many others, this was a major part of the birth of a new style of Rave Music which became known as early Breakbeat Happy Hardcore. I released 4 SMD singles in 93/94 and then 20 years later in 2014 I released the extremely long awaited SMD#5. The earlier vinyl copies sold out many years ago and even SMD#5 sold out just on pre-sale.

So now 25 years on from the 1st release, I thought it only right to make the whole collection available once again on lovely, brand new warm, shiny vinyl. The originals sell for over £50 in mint condition, and now you can have the whole collection, including a previously unreleased track which I call SMD#6, signed by myself, for less than half of that price. I sincerely hope you enjoy this brand new pressing from one of the most important labels in 90’s Rave music history. It’s my pleasure to offer you SMD – The 25 Year Limited Anniversary Edition. 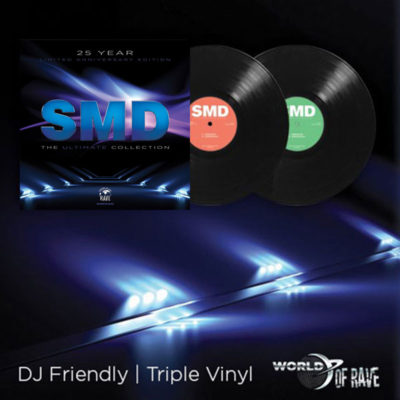